The final language of the Climate Pact references “accelerating efforts towards the phase-down of unabated coal power and phase-out of inefficient fossil fuel subsidies.”i Critics have called this language too weak,ii but the language underscores the headwinds facing energy sources with high emissions intensity and the growing opportunity for companies who can provide carbon abatement solutions. Sustainalytics Sustainable Products Research allows investors to identify companies aligned with climate solutions, such as Aker Carbon Capture AS, which offers carbon capture technologies, utilization, and storage solutions.

Investors should also expect growth in the carbon markets as a means to meet emissions reduction targets, following nearly 200 countries reaching an agreement to operationalize Article 6 of the Paris Agreement.iii This agreement brings rigour to the carbon market by clarifying the mechanics of emissions trades between countries, and eliminating double counting.

As countries look to shift energy sources away from fossil fuels, it will be necessary to consider the role that nuclear energy should play. As evidenced by the decision to exclude nuclear advocates from the conference’s ‘Green Zone’ at COP 26,iv polarization driven by regional differences in public sentiment towards nuclear energy remains strong. However, it seems clear that nuclear energy will play a significant role in the decarbonization of energy grids in many regions, providing potential opportunities for investors.

There is an increasing recognition that climate change and biodiversity are inherently linked, as reflected in the Glasgow Climate Pact. Investors should consider both risks related to biodiversity loss and opportunities for leveraging nature-based solutions to achieve climate adaptation and mitigation goals.

Investors can consider biodiversity through several lenses. For example, the Biodiversity Programmes indicator in Sustainalytics ESG Risk Ratings assesses the extent to which companies in relevant industries have systematically identified biodiversity protection areas and have implemented biodiversity plans and targets.

Over the past six months, there has been a surge of net-zero commitments by major financial institutions and the emergence of industry efforts such as The Net Zero Asset Managers Initiative.v

While this is broadly seen as a step in the right direction, the narrative surrounding COP 26 has demonstrated that long-term commitments can invite additional scrutiny from stakeholders if seen as superficial. This reputational risk can be mitigated by setting strong 2030 targets for emissions reductions and applying these goals to a broad scope of assets. It is not only the destination of 2050 that should be of focus, but the path taken to net zero is critical in limiting cumulative GHG emissions.

Get in touch to learn more about how Sustainalytics is supporting investors on climate action. The IRA was signed into law in August 2022 and directs nearly USD $370 billion towards investment in sectors at the heart of the economy’s transition to a Net Zero world. 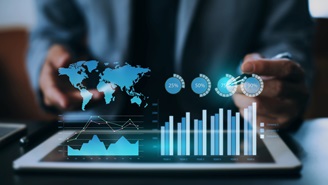 Many global investors already incorporate ESG factors into their evaluation of public companies across developed markets. We are now observing increasing interest in applying ESG considerations across a broader set of asset classes and regions.